I recently spent quite some time reworking the overall look of Boxes' machine thumbnails. Here is the result. 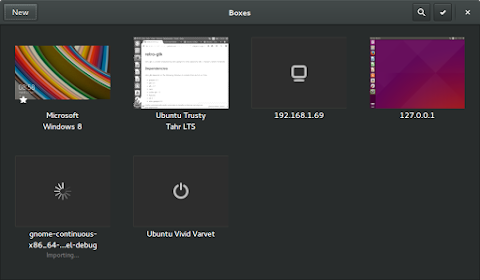 Up until now, Boxes' stopped machines were represented by a black box. It was nice as it represented the idea of a shut down screen, but it was pretty hard to differentiate a stopped machine from a running one displaying a black screen. This was stated in bug #730258 where Jimmac suggested to follow this design where thumbnails are draw as gray frames with a medium sized emblem in their center, using the system-shutdown-symbolic icon to suggest the stopped state.

Updating the other thumbnails

Thumnails are now consistent, elegant, and the machine's status is more understandable.

Working on this feature helped me to discover bug #751494: GDMainIconView draw pictures without their last column of pixel.

The way a machine is shown as favorite has also been revamped. A big heart shaped icon (the emblem-favorite-symbolic icon) was added to the bottom right corner of the thumbnail, and this was causing multiple problems (see bug #745757):

A machine is now shown as favorited by adding a tiny star to the bottom left corner of its thumbnail.

Unfortunately, problems still exist as the white star becomes invisible on a white thumbnail (see bug #751478). I tried to solve this problem, by making the star casting a shadow, which worked well but it required me to implement a blurring function into Boxes' code, adding 100 lines of Vala to an already complex codebase for one tiny functionality which has nothing to do with the application's domain, hence this solution haven't been retained.

Zeeshan suggested trying to solve this by using the image's energy, as the code to do such a thing already exists. This solution still has to be explored.

janvier 19, 2019
Libhandy 0.0.7 just got released! I didn't blog about this mobile and adaptive oriented GTK widget library since the release of its 0.0.4 version three months ago , so let's catch up on what has been added since. List Rows A common pattern in GNOME applications is lists , which are typically implemented via GtkListBox . More specific patterns arose, where rows have a title at the start, an optional subtitle below it, actions at the end and an icon or some other widget like a radio button as a prefix. These rows can also be expanded to reveal nested rows or anything else that fits the need. So far every application using these patterns implemented the rows by hand for each and every row. It made using these a bit cumbersome and it led to inconsistencies in sizing, even inside a single application. To make these patterns easier to use, we implemented HdyActionRow , HdyComboRow and HdyExpanderRow . HdyActionRow The action row is a simple and flexible row, it lets
9 commentaires
Lire la suite